The Association of Southeast Asian Nations (ASEAN) has been in the region for more than 48 years. During that time ASEAN has achieved some of its goals and mission. ASEAN transforms from several members become ten members which cover all Southeast Asia region. Initial focus of ASEAN is on political stability and security. But later, ASEAN want to be the big family which helping each other in term of economic and social development.

At this stage of ASEAN enter community based policy, occur some problems which are not handled before. From several survey including by The ASEAN Secretariat, some skepticism raised, doubt even pessimism among ASEAN people. These perceptions might come from lack of knowledge about ASEAN.

The paper will address problem on lack of ASEAN awareness from two approaches. Firstly, there are diversities among ASEAN members in term of political system and stages of their development. Secondly, different situation of members ASEAN demand dynamic policies to get better result.

Commitment of ASEAN members to create environment that support their development in harmony has been in mind of founders. It was implication of situation that time such as Cold War in the World Politics and its confrontation among Southeast Asian countries. Members ASEAN seems do not want to involve on Superpower conflict and competition.

Not all Southeast Asian countries accept ASEAN mission when it was established. Sense of suspicious remains at that time so some of countries reluctant to join ASEAN.  ASEAN transform from five become ten members.

If we look closer on political system of members state and economic development there are gaps and differences. Based on democratic political system it is clear that ASEAN members have differences in their nature. That’s makes ASEAN unique.  Andreas Ufen (2007) presents table of democracy level in Southeast Asia.[2]

From table above it seems that member of ASEAN has certain variety in political life. That political system will influence level of awareness of ASEAN. Even if we look at economic development, make us clear that there are different levels of prosperity.[3] 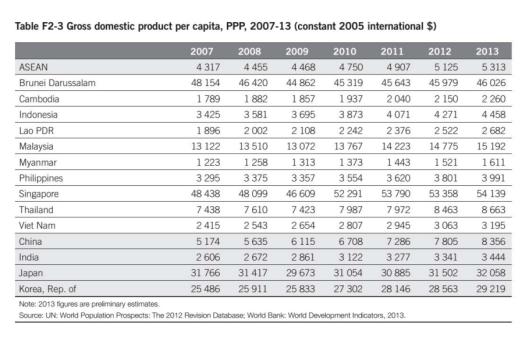 In order to achieve goals in socialization of ASEAN to grass root or at least to wider public in Southeast Asia there is need different policy for each members. For countries which classified as higher level of democracy, level of involvement public could be larger. Government here can be passive party but NGO and people get involve directly.

And for some members where government is the only source of authority, campaign could be effective by certain ministry or high level officials.

If we look at character of members ASEAN it is clear that the policies to increase awareness on unity of ASEAN should be done differently.

With different character and situation of every members of ASEAN, scale of priority is either different. Here, ASEAN need flexible and dynamic policies in order to make people of ASEAN aware the importance such regional organization that will help them.***